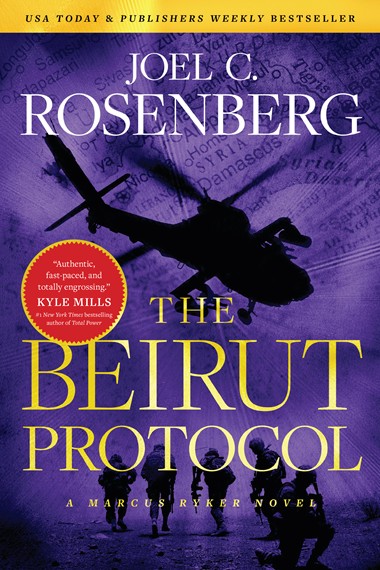 ISBN: 9781496437907
Retail Price: $16.99
From New York Times, USA Today, and Publishers Weekly bestselling author Joel C. Rosenberg!
A game-changing peace treaty between Israel and the Saudis is nearly done. The secretary of state is headed to the region to seal the deal. And Special Agent Marcus Ryker is leading an advance trip along the Israel-Lebanon border, ahead of the secretary’s arrival.

But when Ryker and his team are ambushed by Hezbollah forces, a nightmare scenario begins to unfold. The last thing the White House can afford is a new war in the Mideast that could derail the treaty and set the region ablaze. U.S. and Israeli forces are mobilizing to find the hostages and get them home, but Ryker knows the clock is ticking.

When Hezbollah realizes who they’ve captured, no amount of ransom will save them—they’ll be transferred to Beirut and then to Tehran to be executed on live television.

In the fourth installment of Rosenberg’s gripping new series, Marcus Ryker finds himself in the most dangerous situation he has ever faced—captured, brutalized, and dragged deep behind enemy lines.

Should he wait to be rescued? Or try to escape? How? And what if his colleagues are too wounded to run?

This is the CIA’s most valuable operative as you have never seen him before.